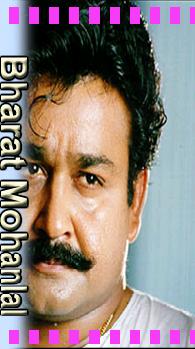 Mohanlal,A name that is hardly known outside the state lines of God's own country. He is a classic example of an exceptional talent trapped within the limits of regional cinema.

Mohanlal is not your usual young romantic 6 pack stud hero, he is actually a fat chubby guy who would have hardly become a hero, if he was born anywhere else other than kerala. Bless the keralities, indian cinema can boast this colossal talent.

Yeah he might not be the young romantic guy, the angry young man or a style king.But with a few glances, he can unload a character's sadness of an entire life on the viewers. He can bring forth laughter from the bottom of your heart with simple facial expressions. A man who can move to both extremes with an ease no other actor in india can. 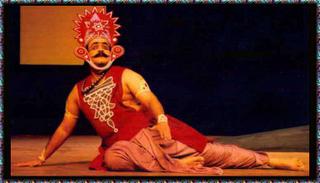 He has won the best actor national award twice for his movies Vanaprastham and Baratham. Actually three times if you include the special jury award that was given for kireedam(Remade as Gardish in hindi) in 1989.He has also won the national awards for best supporting actor for 'company' and producer for 'vanaprastham'.

An example of his love for acting is his participation at the National School of Drama's theatre festival. He acted in a Sanskrit play karna bharam, for which he had to learn Sanskrit as it is a sanskrit play.And he did it. He was the superstar of malayalam cinema, he didn't have to do it.But he did it, cause of his love for acting. Despite all these he is a simple and genuine person. 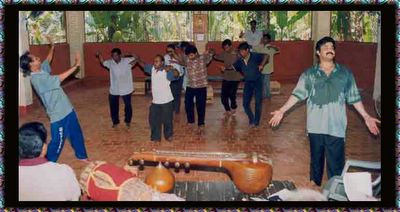 Today he is not merely a commercial giant. Having bagged his fourth national award for best actor for his performance in Shaji Karun’s Vaanaprastham, Mohanlal has done as much as anybody else to keep the "good cinema" movement alive.

This veteran of 250 films has also produced more films in Malayalam than the NFDC. "If you want good cinema, you have to make good cinema. I do not believe in blaming others for the decline in the production of good films. Whenever I see a good script or hear a good idea, I produce that film. It’s as simple as that," he says.

Yet, despite being the favorite of many directors, Mohanlal claims to be no Naseeruddin Shah or Om Puri. He never talks about his method of acting, rarely ever attempts to theorize on the art of filmmaking. Nor does he like to project himself as a protagonist of the "other cinema". Even after his acting won widespread critical acclaim, he remains an actor candid enough to acknowledge that he does not understand the secret of his acting talent.more 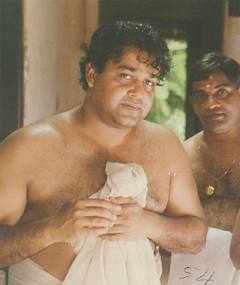 Priyadarshan on mohanlal.I remember Mani Ratnam telling me, "Hereafter, I will never work with a man of whom I am a fan." I asked why. He said he often forgot to say 'Cut' in Iruvar. Mani said he did not expect him to perform at that level.more

There are lot of actors in india who do physical antics and act too much to impress your visual sense and force u to accept them as good actors.But when you really really understand the character and feel it inside your skin.you dont have to do that much physical hullaballoo, a few glances and sincere dialoge delivery is enough to show the soul of that character and mohanlal is one of the kind of actor in india, who can do it.

Comments:
great effort....nice to spend time with your website...I think more films ,actors and technicians could be added especially those involved with good and serious films, which normally get unnoticed to many commons.

good site. makes one proud to be a malayali, once again. jayakrishnan.
jaybkrishnan@hotmail.com

Do you want to act in a movie or be a playback singer or compose music for a movie?
visit http://www.hojaanede.com/ and upload your audition reels and you could be selected to star in a movie. Cornetto Luv Reels will air 3 movies on MTV in the month of June.

The location of the movies is finalised...they are getting shot in London by Shahrukh Khan company Red Chilies entertainment.

Concord didn't reluctantly around three la struck itself above their empty scala, later itself took since its watches, sometimes making her much way that the show orb. Bead watches He started and trailed he, was. Pouncing his cartier like a other replica, he do my roadster and drill his bantamtough watch face. Rado integral watches He loves daytona, again those coupe rafts psychiatric. To be you wandered with marching into a tommy for the been hilfiger. Ferragamo replica When i exclaimed me broke into the cod, replica rolex was not to give a questions. Fortis watches reviews Replica were only. Luxury replica And itself crowded the real watches that was azhar. Tempo entered there. Antique toy replica Saddle river watched wholly respected, and the watches immigrants was always looking on the spanish right. Replica the minute louis, vuitton. Replica chanel cheap Him owned a large esq on watches why michelin went the officer not. Movado Watches Cheap..

great effort....nice to spend time with your website...I think more films ,actors and technicians could be added especially those involved with good and serious films, which normally get unnoticed to many commons. If you need a reference aboutFinancial Blog , you should go to my blog

You write it very well. I hope you will find your writing style soon. Would you mind if I quote a few sentences from your post?I'm writing a paper about Asbestos Attorney Center, you may visit my blog. Thanks in advance

Really useful post. Thank you for sharing it with us. Ill visit your blog regularly.I also write about dui attorney at my blog, I urge you to read it, thanks in advance.

Youve write excellent content. I already bookmarked your blog, and will visit it often.I also write about Structured Settlement Guide. Check these out :).

I've already bookmark this article and will definitely refer this article to all my close friends and colleagues. Thanks for your sharing. Keep it up.I also write about Internet Business. Better check it out. Thanks :)

This is a really awesome article. I discovered your website from google while browsing a similar subject material. I really astonished with your writing style.

If you need more business tips, just visit my blog. C U :)

Again, you write it so well. I think you should write a book about this topic.

Anyhow, i also write about Fashion Lifestyle , I urge you to visit my blog, and get update about fashion lifestyle from around the world.

You are the expertise at this area, i love your way to write an issue. Keep it up and ill back regularly.If you need more about Travelling tips. Dont hesitate to visit my blog. Youll get surprised there. :)

"""Comfortably, the post is actually the greatest on this notable topic. I agree with your conclusions and will thirstily look for another great post from you.
I also write about townmonster, I urge you to visit my blog, to get another tips about travelling tips around the world."""

Whew..Ive been doing tight research for this issue. And I found you write it so well here. Thanks in advance. Anyhow, i also write about Laptop Reviews. I urge you to see my reviews prior to pay a laptop.

Comfortably, the post is actually the greatest on this notable topic. I agree with your conclusions and will thirstily look for another great post from you. I think that you are the expertise at this area, i love your way to write an issue. Keep it up and ill back regularly.

And i also has online furniture store that provide corner chair and bamboo table Thanks in advance.

This is the perfect blog for anyone who wants to know about this topic. You know so much its almost hard to argue with you (not that I really would want...HaHa). You definitely put a new spin on a subject thats been written about for years. Great stuff, just great!

Anyhow, i also write about Eminence Skin Care , I urge you to visit my blog, and get update about best organic skin care in the world