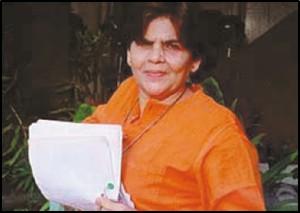 Indian film industry has produced so many great directors in main stream and in art movie categories. But very few of them did the middle of the road movies. Sai paranjpaye not only belongs to that list of selected few directors, she is pretty much the only female director who made some highly successful movies in that category.

Born in Lucknow into an illustrious family associated with social reform movements, Sai Paranjpye was educated in Australia, where her grandfather was High Commissioner. She published a collection of fairy tales in Marathi when 8 years old. She became well known for her Marathi plays, as a playwright and stage director, especially her plays for children. She started directing for television during the 60s and worked as a producer for doordarshan in the early 70s. She started with films during 1970s.more

As a director she could have done the usual, make a blockbuster movie earn money and fame for that time being and direct more junk movies and always be in the lime light, but she chose to do it the other way. she made very few movies which went on to become classics .

what makes her different from others is her unique sensitivity, creativity and her brilliance in screenplay writing. she can blend a realistic story with lots of humor and real life characters and give a wholesome movie. Like many great directors of india, she does not adapt a book into a movie. Most of the time her stories are from her personal experiences. Incidents that she encountered, personalities or fables everything becomes a beautiful story in her hands. That core is beautifully decorated with a good screenplay, songs ,comedy and realistic characters to create a great movie.

Sai entered a men dominated profession of film direction in the 70's itself. she took some sensible cinema and made a mark for herself.

check out my reviews on her movies

sai the chairperson of the Children's Film Society of India