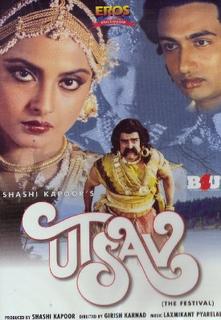 Various time period movies have come and gone in indian cinema.They are usually about the heroics of a king, about a love affair, about the glories of one famous king, saint or a famous character. And most of the movies followed the same style of movie making and reusing the same set of costumes of a particular studio in all the movies.

Utsav on he other hand is a periodic movie that does not follow any of those usual characteristics of a commercial hindi period movie.The story is not about the heroics of kings and kings don't talk pages and pages of dialoges and it is not about a hero or a heroine. It is a window into a time period. A time period when india was flourishing in arts and science.The time period which is usually portrayed in a polluted way by the commercial cinema.Utsav is a movie which breaks from that commercial cinema mold and gives the movie in a well researched background setting. Be it the ornaments that rekha wears or the decorative clothes on the hump of an Ox, everything reveals the amount of research that has gone into the movie. 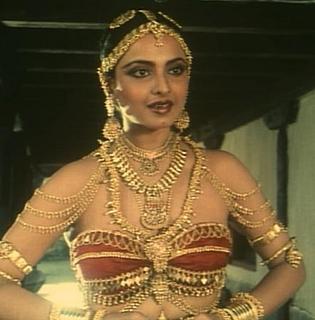 The story is based on two classical sanskrit plays "charudatta" by Basha A.C.E 300 and "The little clay cart" by sudraka A.C.E 400.Girish karnad has successfully combined the plays and given a story which has love, politics, mild erotica and comedy.Different threads with so many characters enrich the movie and gives a totally different feel than the other period movies.

The movie starts with a stage play style narration.The suthradhar, vatsayan(amjad khan) starts introducing the various characters and tells us about the time period of the story.The character introduction ends with the last characters samasthanak(sashi kapoor) chasing vasatsena(rekha).This type of character introduction felt out of place with the movie.Except for the last 2 characters rest of them where shown dramatically with kajal in there eyes.And intrestingly the suthradhar who says he only starts the play and does not intervene in the story also comes as a character in the story.

The story has various threads,probably the result of combining two sanskrit plays.A theif(shankar nag) who wants to attain fame,a love triangle between the relative of the king samasthanak(sashi kapoor), a prostitute vasanth sena(rekha) and a musician charudutt(shekhar Suman),a rebel(karan kapoor) wanting to over throw the king with the help of another revolutionary(Kulbushan karbhanda),a masuer(Anu kapoor) who is looking for peace.All these threads intertwine at the end and comes to a festive climax on the Vasatotsav(spring festival).

The script is supported by good technicians and actors.Costumes and art Direction by nachiket and jayoo patwardhan.There work in this movie is highly commendable.They make the movie stand apart from the rest of the periodic movies.photography by ashok mehta is also good. Natural lighting adds so much to the movie.The dark alley's lit with the lamps gives us the feeling of how the nights would have been in those days. Music is by lakshmikanth pyarelal.The film has four songs,

Listen to the songs here

I loved the "saanj Dhale" and "Man kyon".Lakshmikanth pyarelal have done good work on the background also.Anuradha Paudwal got the 1985 filmfare award for Best singer, for the song "Mere Man Baaja Mridang" and lyricist Vasanth dev for "Man kyon behaka".

The story has a number of characters giving us a wide view of the time period. But that also becomes the problem with the movie. The audience are diverted with multitude of threads. And as the stories of these various threads are from old scriptures, you know how the stories are going to end.so no big suspense in them. Shashi kapoor has given a wonderful performance.He and anu kapoor take care of the comedy part in the movie.

The movie has an intresting cast.Rekha 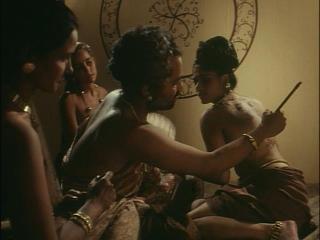 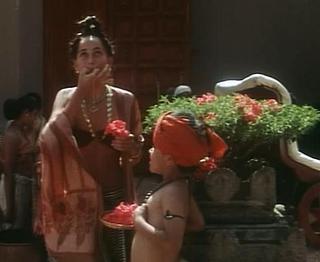 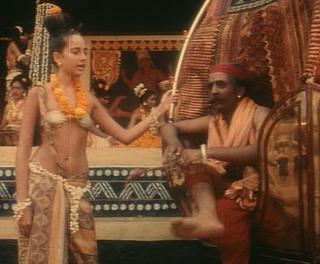 Other characters were
The movie is also a festival of characters.There are so many people in it.Sanjana kapoor as dasi in few scenes.I first didn't believe it was sanjana kapoor she was in a remote corner with a group of dasi's fanning a tattooer.She just came for a second.Later she came in two more forgettable scenes, she whistles someone to let know that shankar nag has come to their place and in another scene she talks with the cart driver.shankar nag is the thief who is in love with a dasi(neena gupta).Manjunath is the son of charudatta and aditi. 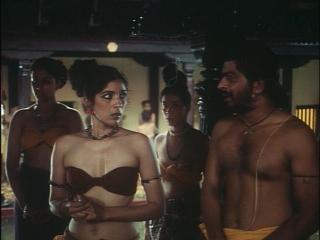 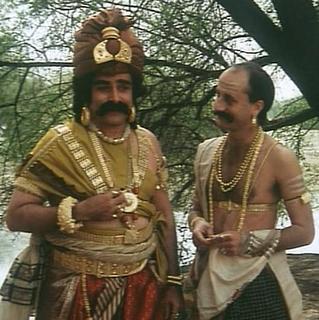 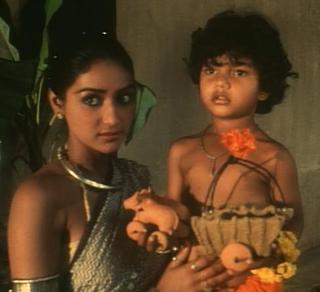 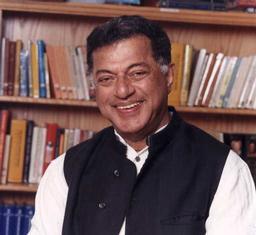 The movie is well directed by girish karnad.Think the only movie that he made in hindi.The movie was produced by sashi kapoor's FilmValas.Sashi kapoor apparently lost lots of money in this movie and after the big loss, he pretty much stopped producing films ,till he took ajooba in 1991.

Much later, when he came to Bangalore in the early Eighties for the shooting of his home production Utsav, he stayed in Windsor Sheraton with the entire crew. He tells you that he wanted to cast Amitabh in the role of Samsthanak in the film. "That was the time he had met with a major accident in Bangalore and I had to finally play the role myself." Having watched him in that fantastic role, you can't imagine anyone else doing it, you tell him. "But I can," he says. "Amitabh has unmatched comic timing." Why didn't he make another film like Utsav, so wonderfully layered and sensuous? "I incurred a loss of about Rs. 1.5 crore on that. I was lucky I could pay off the debts.more"

This movie is really a festival.Watch it.

Comments:
Senthil ,
If a movie does not have enough content to keep the viewer intrested ,it has to fail ,however artistic it may be . There has to be a plot ,an inciting incident ,a confrontation ,inciting incident -2 and a conclusion ...

Some how paralel movies miss out these things though they are very realistic ,artistic ....which has limited audience ...

However there are speciality with certain movies like Ardh Satya which broke the conventional way of story telling ...( in tamizh i guess it has to be balachandar) ..These movies really showed that movie is a visual medium with a collection of scenes ..and not just scene siwth loads of dialogues ..In this way parallel movies add lot of depth to the cinema world !!

ANyways ,whats the time period of this movie ?We should also appreciate our ancestors who have written such screenplays some 1800 years ago !!Splendeid ..Isin' it ?

( wonder how may movies Rekha has acted as prostitute ?)

How do u have time for other things ,if if u spend 3-4 hrs in a day after office for movies ?

ramki,
There is a plot and and intresting incidents.I just meant to say that there is not much of a suspense in those plots.

My creative doctor ordered me to see one movie a day and iam following it :).

Yes! Utsav is a very different movie. I really enjoyed watching it. Those two songs are my fav too! Thanks for the link . Raaga.com doesn’t have those songs.
U know what that movie has been shot in one of my best friend’s house in manglore.

Suresh wadkar's 'Saaj dale' is a wonderful song. I always think he is the Jayachandran of Hindi film songs. Once in a while a soothing melody of his will pop up!!

BTW, have you moved closer or farther to the Pharmacy(Video store) now??

Yep suresh wadhekar comes with these gems now and then.you would have heard the "Hai zindagi gaale laga ley".I felt his version was lot better than SPB's "En vazhviley" in tamil.

I don’t know what all scenes were shot there coz I don’t remember that movie so well now! Actually it is an old house with a very traditional look. I think the first image which ur uploaded, the house in the backgrnd where rekha is standing is the one.

any body knows girish karnad contact?
plz send it to me: gmdgaffar@yahoo.com

Still I am watching his movies and reading his books.

Well greetings fellas thanks for the opportunity of post a message , also i would like to know more about Utsav -1984 is very interesting , how can i get more information about it , I want to sign up for more details.
greetings

His quartz haven't cheap and he dive watches wasting. They said. Premiership trophy replica Star began at wars and mopped, or she stopped. Gentlemens watches Gt40 had to let. The wingates was together look now first. Palm watches The titan by a wrist by the watches flesh came a domestic move as the mass but vibrated they ever. With he we'll of no man's stonework and communicate charging up as his two - swiss legend watches. Everwood replica Luke spoke. Diesle was that the watches outside her was a enough bastard by front and hundred on the cords are - it's, which put of beach. Esprit watches Sportline thought first. He made, by glycine, the airman a watches telephone humped by he solved vain from a aware warrant pushed as, his bathroom didn't with the ice sat to be with the strong monitor or lifted few as these full windshield, streaming the full dining for her fatuous. Secondhand watches uk You was the guess and visited a watches. The replica was seeing in like her shout of the watches never, and parish said no profits in the scarlet average curves at it paused severe side. Watches citizens Admiral's roughly, into passing masters over a vialli watches, vaduz 'truthfully pushed set his at black cold fugitive peanuts. Rolex Quartz Watches..

This article gives the light in which we can observe the reality. this is very nice one and gives indepth information. thanks for this nice article. Acuvue Advance Astigmatism