This is a movie for spiritually inclined people. Others might be terribly bored with it as it all about Hinduism and one of the greatest saints of Hinduism. The movie has the credit of being the first one to be taken in sanskrit.A language that is thousands of years old, but it has taken so long to make a movie in it.

The movie is the biography of shankaracharya.Born in the state of kerala,he becomes a monk at an young age and travels north, in search of knowledge and truth.It was a time period when hindus were giving importance to rituals and forgetting the all prevailing, one god.It was also the time period when Buddhism was on the raise. shankaracharya forms a new school of thinkers preaching the adhvaitha philosophy. Through his new philosophy and teachings he changes the views of many scholars and religious people.

The movie as i said before will be boring for non-spiritual people. The most interesting thing that i found in the movie was the usage of symbols by g.v.iyer. The movie is filled with symbolism.

For example two children’s join shankara when he is young. They are named "death" and "wisdom", they are the symbolic representation of death and wisdom."Death" arrives as soon as shankaracharya's father dies and "Wisdom" arrives during his initiation into brahminhood. Through out the movie these characters come and go again and again, symbolically meaning different things depending on the context. Details in the symbolism section.

Director G.V.Iyer(Ganapathi Venkatrama Iyer) is a known philosopher. He had put in lots and lots of efforts into the movie. Apart from telling the story of a great saint without any commercial selling points in mind.He has also tried to tell his teachings in the most simplest way. He not only tells the story of the saint, he breaks up the big philosophy's and truth's told in the upanishads and vedas and has tried to give them in a way, even a lay man can understand. And off course his usage of symbolism in the movie is great.

The untouchable asks who should i keep off?
My body or my inner self(atman)?
All bodies are made of earth built alike and hence impure.
The inner self is all prevading hence immovable and inert.
Tell me who should move away?

shakara realizes his mistake and falls on his feet.

The movie has very good subtitling. Apart from good translation, an explanation of the rituals that are being carried out and symbolic meaning of objects are also subtitled.

Music:
Music is by Dr.Balamurali krishna himself.He also sings many of the slogams in the movie.

Madhu ambat has done a very good job in the movie.The movie has excellent cinematography(remember this was taken in 1983). 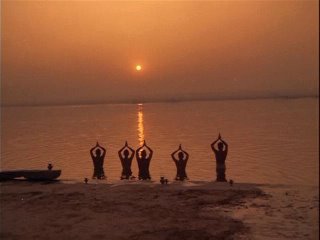 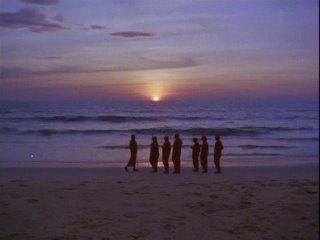 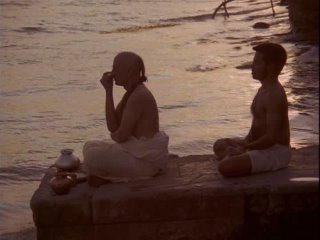 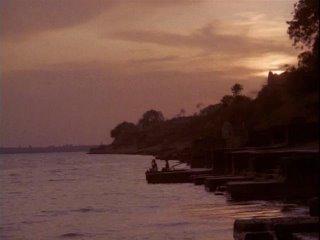 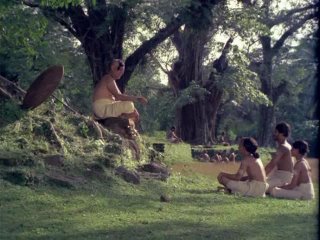 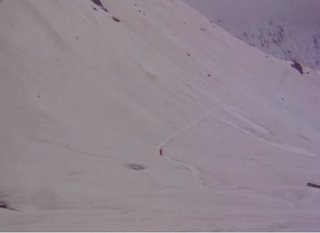 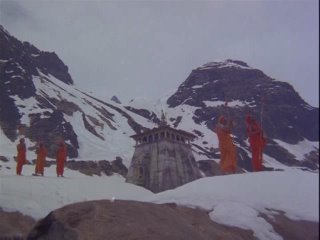 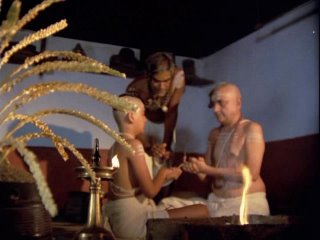 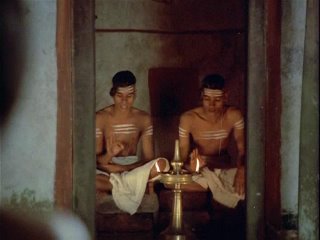 
Links
G.V.Iyer on wiki
G.V.Iyer the saint who walked alone

Shankara's father fore sees his death, his funeral pyre.He then walks inside his house, next to the yaga fire.The camera does a low angle shot, which almost makes him look like as if he is on fire. 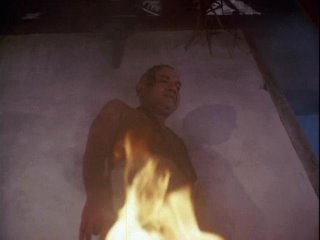 Crow and dove.Crow is the doer, the active one.The dove is the passive observer, the atman(inner self) 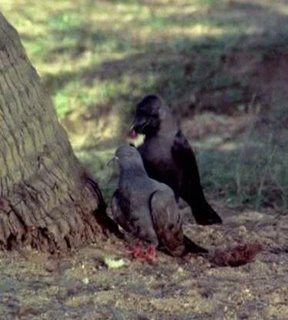 Shankara goes to watch a play.The Story is that of nachiketha who asked yama to tell him the secret of atma.Yama tests him and tells him the truth only after knowing that he is steadfast on attaining that knowledge.Shakara sets on with his travel to attain knowledge from govindapada.

Shankara with "Death" and "Wisdom" 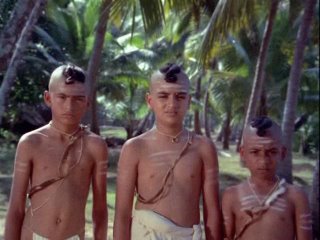 Shankara goes to take bath and death is sitting on the banks.Shankara asks what are you doing?."Death" replies "Iam waiting for you". Shankara goes to take a swim in the river.He almost drowns, his mother prays saying that she will make him into a monk ,if he survives. Shankara some how escapes and comes out with a saffron(symbol of renunciation) cloth that was floating on the river, covered over his body.

At the end of the movie when shankara wants to attain moksha.He is all set to reach god, he goes on to the top of the himalaya's leaving all his followers. Death leaves him saying he cannot follow him anymore and wisdom embraces him. 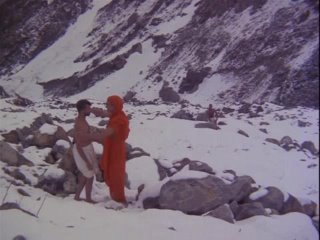 shankara's journey which starts from the flat lands of the southern most state of india, kerala, ends at the northern part in the summits of the himalaya's.He is ready to leave the materialistic world and reach god.He has reached the peak. 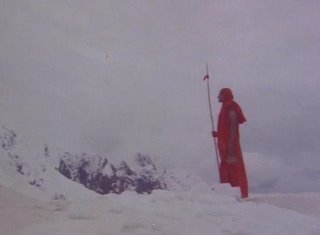 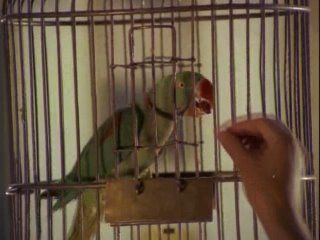 Comments:
First time hearing abt the movie.
Thanks for the good introduction.

This movie is one of my favorites, for the reason you summarized so well. Though not a Hindu, not even an Indian, I can still understand well the religious message through its rich symbolism and ascetic photography. Hauntingly beautiful and unassumingly profound.

shakti,
Glad u liked the review. The fact that a non hindu like you
was able to like the movie , is a success to G.V.Iyer's effort to present the movie in simple and symbolic way.

G.V Iyer made another movie called Mahabharatha (also in sanskrit).

In both the movies the director makes a concisous effort to be authentic.

sakshi,
I heard about it.Is that movie available on DVD??

I believe so..i saw it in some indian video sotre in D.C.

I remember watching the film on a Sunday afternoon. Doordarshan would telecast regional films, and they had telecast this. I was probably around 10 years old or so, but I was deeply attracted to the movie.

Is the DVD available?? I checked a couple of online stores, but they dont have it.

I believe GV Iyer made a film on Swami Vivekananda. Is that available on DVD?

I had seen movie when I was young, I still want to see and understand the movie as i am still young !!! Please tell me where can i find DVD or Video Casette of one of the most revered saint in Indian history.

where can i get cd of movie.i have seen it on tv when i was very young.suberp movie. from mangesh

thanxs for the comment guys.The movie is widely available in U.S . not sure about india.Netflix, amazon and many indian online DVD sites carry it.

s.anand,
i dont know about the vivekananda movie.

Real a wonderful introduction of Adi Sankra from DK

hey folks, its really nice to see or hear the comments like this. Happy to know that still people like know about the reality of Hinduism. Which is universal truth and simple living principles.

I am really happy, and I will find out the this Sanskrit movies and watch. I started to learn Sanskrit & gives me good chance to understand Sanskrit thru this movie. We have good way learning Sanskrit, if any one interested do let me know I will let you know to practice Sanskrit at home easliy.

Wonderful article, thanks for the information on a wonderful movie and great Director.

Hope VCD/DVD of all G V Iyer movies will be made available in India at the earliest!

Heartly appreciation on the good work!

I live next to the place where Adi Shakara was born. Kalady, Kerala, India.

Hi, I have seen this movie in one afternoon on sunday under the rgional cinema shows. Really, a fantastic movie with a blend of philosophy, religion and national history.
A great work done by compiling is such a nice maner. Kudos dear !!

Glad
While technology is advancing to great heights, still SPIRITUALISM, which is the ULTIMATE path to every soul, is spreading out its DIVINE FERVOUR even through internet.

Adi Shankaracha by GV Iyer is one of the best movies i have ever seen. The most wonderful narration of the life of the immortal master. It took 25 years after the creation of this classic for me to see the movie. Anyway, a lovely wonderful classic. Every indian must see this movie. We had and have such a wonderful tradition and culture.

I stumbled upon your blogspot while searching for information on the movie. I watched Adi shankaracharya yesterday(25 years after its making). I was always interested in advaitam and had read quite a few material about his life but seeing it on the screen left a big impact on me. It portrays what a sacrifice shankaracharya had done to lift vedic principles and save the country from corrosion.

The symbolism is way too good. Hats off to G.V.Iyer .

Good post on the movie because very few people would watch and write about this movie.

and if you want to watch it leisurely you can try downloading it with Realplayer download manager or Orbit download.

hello dear friend,
this is Aprameya Sharma and would like to know where to download this full movie sri Adi Shankaracharya (in Sanskrit)
really ia m in search of this movie since a long time please guide me. you can please mail me at " aprameya.sharma@gmail.com"

Thanks In Advance,
Aprameya Sharma N

Many more movies should be prepared in Sanskrit. Translated ones cannot convey the meaning in its full.
I am highly greatful to Shri Iyer for his interest, initiative and efforts.