Bariwali(The Lady of the house) -Bengali 1999

Another nice movie from rituparno.This is the story of banulatha(Kiron kher) an old spinster, who has been leading a lonely life.Banulatha has a sad past, her marriage did not happen as her would be groom died by a snake bite on the eve of the marriage.Banulatha has been a spinster since then.She lives in a big house with a maid servant ,old house keeper and lot of dreams and desires. 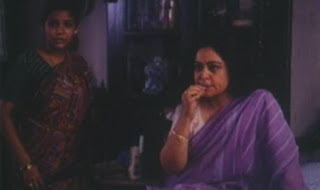 She is finding it hard to keep the house because of her financial difficulties.Her lonely life becomes colorful when a movie director asks her house for shooting. Banulatha is attracted towards the director Deepanakar(Chiranjeet), she starts having feeling towards him.The shooting ends , what happens to banulatha is the story. 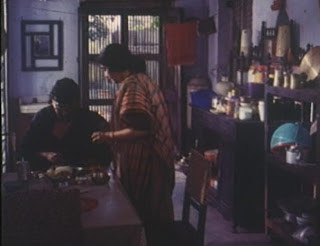 Rituparno takes his time with the banulatha character and beautifully conveys her loneliness and attraction towards Deepankar.Deepnakar's entry itself was a nice one.The current goes off in the house, there is some problem in the power switch board.Deepankar who comes to meet banulatha for the first time , sees banulatha struggling with the switch board, he says he will fix it and oolah he brings light into the house and banulatha's life. 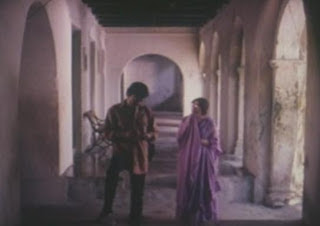 Sudeshna Mitra(Roopa ganguly) is the lead actress of the movie, and the movie that they are shooting is Tagore's "Sand in the eye", which is nothing but choker bali.The movie that they are shooting focuses on the widow character(played by aishwarya in choker bali), her suffering and ironically the director deepankar is completely oblivious of banulata's.There is a scene in the movie where they want a married woman beautifully dressed with lot of sindoor to sit next to sudeshna mitra in the movie.just to bring pity to the widow character in the movie.Deepankar insists that banulatha should do that role.Again there is an irony here, this almost widow like spinster acts as a happy married woman and the lead actress of the movie who has it all acts as the widow.There are a lot of scenes like these in the movie. 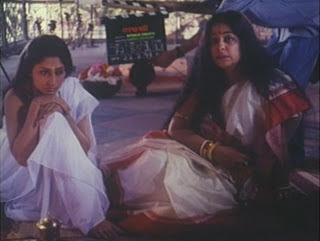 The movie is subtle and nice.But i just couldn't stop comparing it with 36 chowringhee lane.The core of the movie is definitely inspired from 36 CL.But it is not even close to 36 CL in many aspects.Rituparno actually does his version, where there are many characters and lot of ironies and stuff.This actually makes us loose focus on banulatha, whereas in 36 CL it is all Violet stoneham.Jeniffer kendal rocked in 36 CL but ironically she didn't get the national award.


Music is by Debajyoti Mishra.He has done a nice job in the movie.There is this beautifully marriage song that comes during the title and at many places in the movie.

The movie is produced by Anupam kher, husband of Kiron kher.Actually the Banu latha role was supposed to be done by rakhee first, but some how it ended with kiron kher.

Awards:
1999 National award for Best Actress - Kiron Kher
There was lot of controversies around this award.Kiron kher went on record that she practiced bengali for almost a year and did her own voice for the movie.But it wasn't so.Read more about it here

Please intimate me when you update your blogs great Priniting Really great. I share to your blog to my Friend By Wholesale Printing